skip to main | skip to sidebar

[Blogger doesn't want to seem to upload the photos, so you can click through above to see them, and I'll try to imbed them again later...]

So I finished my Amy Butler Sophia Carry-All bag. It wasn't as tough as I expected it to be. The worst part was drawing and cutting all of the pieces and layers and layers of interfacing. But once that was done, construction was relatively easy. As per web reviews, I used a denim needle on my machine and it worked very nicely.

As for the piping I went ahead and bought pre-made piping, since that was just easier. Once I discovered my zipper foot, it went it in quite well. I wanted to install purse feet on the bottom, but they were all out at G-Street and I didn't feel like waiting to order them online.

The only other modification I made to the pattern was extending the straps by a few inches for a longer drop, and making the pockets in thirds so that there are 3 on each side rather than 2. This way they perfectly fit my wallet, PDA, phone, and work ID.

My next version of this bag is for my friend Becks - I've imagined a denim version of the bag with a baseball print lining, and she'll provide the curly W patch for the outside. It will be the perfect bag for her to take to Nats games! I'm most excited!
Posted by Spool of Fred at 3:40 PM No comments: 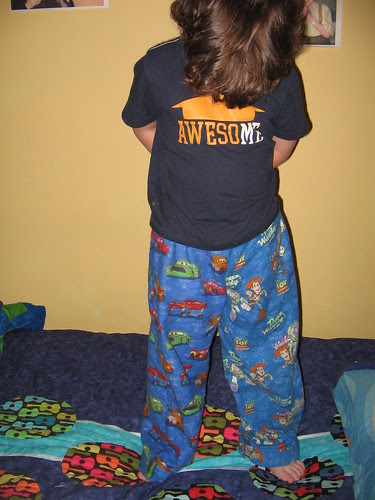 I ran out to the fabric store to get interfacing for the Sophia bag, and found flannel Disney fabric for Cars and Toy Story - the kid's two most favorite movies. So I bought some and figured I'd make him some pajama pants.

Once he saw them, he was super-excited, and made the decision that he wanted one leg of each rather than one pair the same.

In order to tell the front from the back, Av suggested that we put in a tag, so there is a small green fleece "tag" in each. They are a little long, but he'll grow into them.

Super easy pattern. I think cutting and marking the pieces took longer than sewing them together.
Posted by Spool of Fred at 1:29 PM No comments:

My next planned project is Amy Butler's Sophia carry-all bag. I've been in love with this pattern since I first saw it. I really like the shape, and since I was thinking about making a bowling bag style bag, I thought this was it!

I got the fabric already - seen here.

I can't decide if I should go with a simple red gingham for the liner or a yellowy/gold Moda marble. I'll decide when I get to the fabric store.

Purim is coming up next month (please do not call it the "Jewish Halloween" - thank you) and every year our synagogue as a costume theme for the entire congregation. This allows though who do not want to dress up in the traditional costumes (Mordechai, Esther, Haman, Vashti, and Ahashveros) another option that doesn't require too much thinking. My personal fave was "pajama party" and last year it was dress as your favorite TV characters (we were 3/4 of the Wiggles). This year's theme is "super heroes" which is good, because the kid is WAY into Buzz Lightyear.

So I'm thinking - I'm crafty. I can make him a Buzz costume. I've made him a wicked cool "Super" cape with stars on it, which is what he's worn for Halloween for the past few years. But it would be cool to surprise him with a Buzz costume. Now you can buy a costume (with wings!) on eBay for $24.50 (incl. shipping). Can I make him one though (without wings, although I can buy inflatable wings for $12) although wings aren't necessarily needed since he pretends to have them now).

So after much thought, I went with a zip hoodie (although the hood seems quite large). The hardest part was sewing all the details onto the front pieces prior to final construction, and cleaning up the fabric paint that exploded all over me (luckily it was black paint on a black sweater) but otherwise, not too tough. The whole thing is made from polar fleece, so it will be nice and warm to wear for both Purim and Halloween. The kid wore the jacket as soon as it was finished, and all day today. He would like you to note the red laser on one arm, and his communication button for star command/clock on the other. There are also pockets in the front as per his request. And I did come in under budget. (Having lots of remnants and sewing supplies in the house helped). 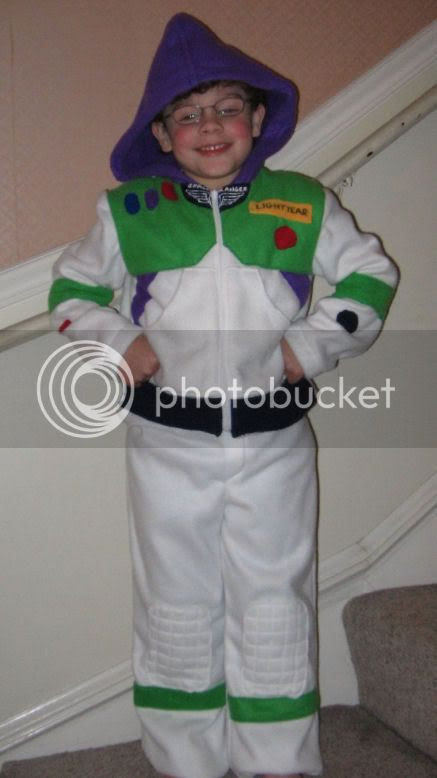 For a homemade costume, I think this is quite kick ass! Go me.
Posted by Spool of Fred at 8:06 PM No comments:

So yes, I finished the guitar quilt this summer. It looks awesome. It's used nightly. All are happy.

But of course, now it's Halloween time. This means it's time for bats. I love bats. Even though I once had an encounter with one in my apartment on Hallows Eve, I still think they are cute. Especially silly cartoony looking ones. So... my next plan is to create a "bat quilt". This is my grand idea anyhow. I was thinking of creating a spin off on one the designs from The Modern Quilt Workshop (much like I did with the guitar quilt), but I think I'll be crazy and do something simple like Denyse Schmidt's "A Day at the Beach" Well, whatever direction I decide to go in regards to the piecing (I'm beginning to think that DS's Beach would be the best way to go), I do know that I want the quilting to be rows of bats. Ooh! Title already in my head...

I'm thinking that the front will be shades of black/white/gray. The backing I may piece together, but would love to include some fun Halloween print fabric. So excited! I love the planning phase! I can't wait to get started...
Posted by Spool of Fred at 4:27 PM No comments:

ha HA! I bet you all thought that I had forgotten about this darn blog. Truth is, haven't had anything to write about - until this week! I FINALLY finished the quilting on the guitar quilt. All of the big guitars and all of the six strings. I just finished creating the binding, and my goal tonight is to get it attached so that tomorrow I can start the hand stitching. Of course the kid thinks that the backing is infinitely more interesting than the front that I so painstakingly designed and pieced together. Pictures to be posted soon...
Posted by Spool of Fred at 6:45 PM No comments: 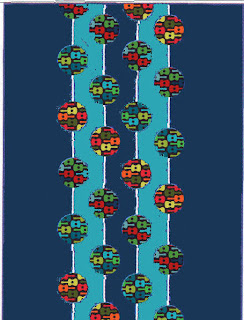 Hoo-ee! It's been a while since an update. Well I modified the design yet once again...

My best friend came up and went hunting for blue fabric with me, selecting just the right shades of blue to compliment the guitars. The guitar fabric was purchased online, and is quite awesome. The Kid is quite excited.

Because I modified from the original Love Beads pattern, I had to change how it was going to be done. To keep it simpler, rather than sewing the circles into the blue parts, I've made them appliqués. All the stripes are spliced and sewn together. All the circles have been sewn onto stabilizer and pressed. They've been placed and pinned onto the quilt and I'm slowly working through sewing them all on.

I've figured out to quilt the quilt, so that's good. I'm going to try and use invisible thread, which is new to me. Who am I kidding? This is all new to me - it's only my second quilt! My thought is that I will quilt large guitar shapes (enlarged 400%) in the blue parts and then "strings" (vertical stripes) down the circles. I found a neat boy kid musical instrument striped fabric for the backing. It is not my favorite, not even my first choice, but the Kid loves it. He keeps reminding me not to forget to add it. My goal is to get the whole thing put together and quilted in time for an upcoming road trip, so that I can work on hand-stitching the binding on in the car. Images of fabric samples will be posted soon.
Posted by Spool of Fred at 1:10 PM No comments: